Design and build your own medieval tavern!

Build a tavern from the ground up in any way you imagine it! It can be a classy place meant to serve kings or a restaurant which specializes in great food.

Optimize your seating arrangement to allow your staff to be as fast as possible, upgrade and expand to attract even more patrons and spread your business to include a hotel, a weapon shop and maybe even a medieval food delivery service!

In order to keep your customers happy you will need to have enough food and drinks at all times, efficient staff, great decorations and proper lights. Combine all of that with your imagination and your tavern might be the best in the kingdom!

idk what version i played at my friends house but it was an engaging gameplay loop at first, and the building/construction tools felt great to use, but i felt like i beat the game prematurely on normal mode in a single evening with 40k status, using the roof decor layered on the outdoor walls on all 3 floors and pretty much infinite money i think largely from doing events. after i did the event serving the king, i wasnt sure if there was an ending, and if so, it was locked behind the target-goal progression tree thing, which, seeing how long it was, i wasnt going to do that. i never even unlocked 'games' for the customers and felt like i already did everything worth doing in the game.

i tried restarting the game on sandbox thinking it would be like all features unlocked except you start from scratch, and was happy about the toilets req, but was disappointed by being given infinite money and couldnt turn it off, so i wasnt interested.

i then tried hard mode back in the regular gameplay, and didnt notice a difference at all, probably because by that point, i discovered that the staff would literally work for 0 wages, happily, for days. and with being able to access infinite variations of staff it meant i only chose those with +1 drink tip or +5 food tip, every time, and set their priorities to suite those, and i also reset their skills for +3 tip +max drink carrrying, every time, and reduced wages constantly like every 3 days. in an extremely short time, i think maybe 2h, i was basically infinite money again.

if it can be done, it will be done, as the saying goes, lol.

i saw on your website that youre basically done with it now, since you cant keep changing it without breaking it for people, etc, etc. i think the game may still benefit from added scenarios, or challenges, like rollercoaster tycoon 2 you start with a funky, predesigned and locked bar shape/function, ,and need to complete chosen objectives in a certain time limit. if you open those designs and objectives to the public to upload/download, they will do the work for you and keep the game alive for themselves without depending on you.

if you make a tavern master 2 with a feature like that, ill check it out for sure.

also, there needs to be something else to do while the game is 'playing'. every time i opened a menu to do something, it was paused. there was nothing to watch. and it was annoying there wasnt 1 more level of speed to increase to, since i had nothing else to do once everything was set up well. i was literally waiting for the results/next day while the game played itself.

anyhow. you did a lot of things right, and im glad you put in the time and energy to make this game. the construction tools felt intuitive and snapped nicely into place, except for some minor annoyances on the walls. and the invalid pop-up interrupting me instead of just a sound/red graphic for conflict. i think you have a bright future ahead of you in game dev and i look forward to whatever you make next

Fun game, but finished this version in just a few hours sadly, and it didn't make it clear how short this version was/how little you could upgrade the tavern. Tempted to buy it because of how much I enjoyed this version, but it would be nice if you could keep your progress since I've put quite a few hours into playing it in this flash game style format :/ IDK maybe that even puts me off buying it, knowing all my progress so far is for nothing.

Where is the soundtrack?

Downloaded this on the itch.io app and it doesn't go full screen. It also has a weird white box around it. You might check into that. Otherwise it works perfectly and I might pick this up on steam sometime.

I picked this up on Steam. I'm wondering how is it that I move the waitresses from one floor to another? Currently the little available circle lights up but I can't actually place here. Bugging me. Just curious. THX.

Is the full release coming to itch.io?

If the web game is like the Steam game, bring it on, enjoy playing it. Very relaxing. Thanks

Thanks a lot :) It should be very similar in pacing

Oh this looks so cool! Saw it on Nookrium's youtube today and had to check it out.

Thanks a lot :) This is a really minimized version because I was really limited for the web version, but next week you can try a free demo on Steam when I release it :)

Looking forward to it!

The web version is pretty fun, any chance of a Linux port for the desktop version?

I really enjoyed the game!
Unfortunately there are some memory leaks / other small bugs that stoppes the game progress: after about 1-2 hours of game, no dishes are serverd. I have to restart the game to proceed.

Also I really don't know how to expand my tavern more. I have completed all the tasks, but there is no possibility to have 2nd floor. Will it be in the final version of the game?

Hello! Thanks for the comment :) There is a PC version of the game here https://lukaglavonjic.itch.io/tavern-master-pc
It has many many more features than the web version since it's not limited by webgl engine :) You can try that version and let me know what you think :)

Hi there! This link seems broken unfortunately. :( could you share a new one with us?

this game is amazing i love playing it in my free time, I'm yet to beat it lol.

great graphics and good controls, i couldn't find any problems in it too!

Thanks :) I hope you'll like the PC version as well :)

how I can have point something on people per min , you can't have less than one person so why the heck do you use a float there?? is f**king killing me. beside that the game is awesome!!

i really like it, i can see a good future for this

Nice start, especially the art feels just right for the mood of the game. A few crits/suggestions:

1. I couldn't find any indication of what if any benefit the swankier furniture confers.

2. I couldn't see any way to delete or otherwise upgrade existing furniture.

3. One table and two benches got built with a different orientation to all the others. Couldn't see why, couldn't see any way to rotate them.

4. It turns into a bit of an idle game after the first few levels; once you've done new unlocks there aren't many more decisions before the next upgrade.

5. Could really use a fullscreen option! Definitely felt cramped playing in a ~quarter of the screen.

Thanks for the feedback! If you like this game make sure to wishlist it on Steam. Full version will have many more things to do in the game :)

i think if you click on a piece of furniture you should be able to see three buttons around it. the coin should sell it. otherwise i don’t know yet. 🍺🍺🍺

I really enjoyed it! Can't wait to see more! 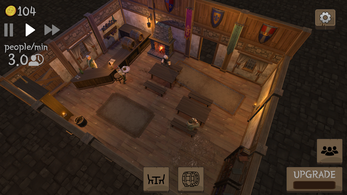 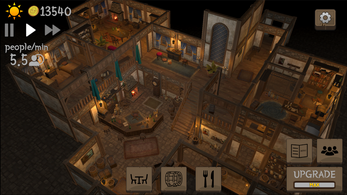 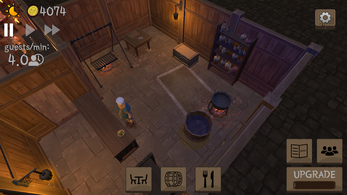 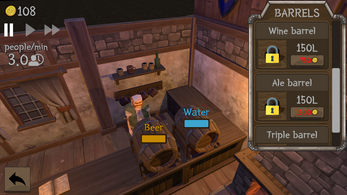 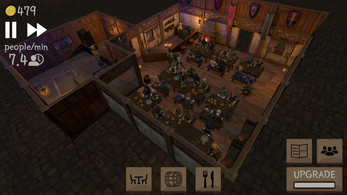 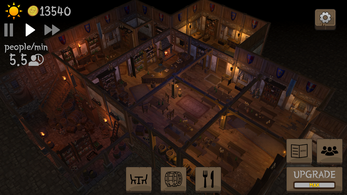